Another month has flown by, may be due to the April meeting being earlier this month.
Our last meeting saw Michael Hewes presenting a talk on recipe design which engendered excellent comment and discussion. Thanks Michael for effort it was appreciated by the members in attendance.
To follow on this month Dermott Dowling from BeerCo will be coming along and will present a session on Gladfield Malts. Dermot has been to the club previously, and has been able to pass on his great knowledge which has been a benefit to us all.
Last Sunday saw the Monster Brew Day at Pete's warehouse with a variety of brew equipment and brews being made. Hope those that came along took away a few ideas for their own brew day.
Another reason for the brew day is to provide beer for the Dinner. This year we will be holding the Dinner at William Angliss on Saturday 11th August. Keep the date free as this function is a winner. Great food and plenty of good beer.
HELP !!!   HELP !!!   HELP !!!
As the winter approaches with the cooler weather,  it's a great time to be making salamis etc.
We are still without a coordinator for the meat club. We would like a member to become involved in the organisational activities of the meet club. We have people who have indicated that they are happy to help out, and many hands make light work, BUT we need one person who is keen enough to MAKE IT HAPPEN !
This coming Sunday sees the annual cider day. It's at Andy's place again this year so if you are interested in brewing a fermentor of apple juice, make sure you have indicated your intent to attend and be ready to roll up your sleeves. It's always a fun day .
Next month we will be holding the Annual Meeting. There will be positions on the committee that will need to be filled, so if you have an yearning to be involved and help direct the club into the future, get on board, you'll be welcome
Look forward to catch up at this months' meeting
Ian Bennett
President

This Wednesday the 30th, is once again at the warehouse.

Dermott Dowling from Beerco will be doing a presentation and it is also the internal competition on Stouts.

This months brewer is.... Ian Tomlin 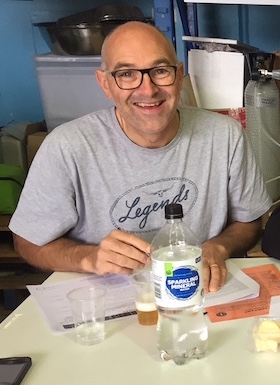 53 yrs old (almost). Married for 20yrs to my long suffering wife Kate, one 18yr old daughter.
I love traveling, having emigrated from UK in 1987 I have lived in SE Qld for 10yrs Singapore for 7 and now Melbourne.
I’ve owned my own small business and currently work part time until I find my next life challenge that will hopefully see me out to retirement.
When did you join the Melbourne Brewers and what do you like about being in the Club?
I joined about 5 yrs ago after being introduced to the club and home brewing by Steve Walker.
When and why did you decide to give brewing a try?
I started brewing with one of my staff as a bit of fun at the time. Having brewed a couple of Coopers batches about twenty years ago which I don't remember coming out too well.
Do you brew kit, extract, all grain or a combination?
I started with kits & bits, I have brewed full extract and partial but now mostly all grain. It is becoming harder to find the time to brew all grain so I am experimenting with LME/Partial mashing at the moment.
I also dabble in Mead making.
How many batches are you up to?
I dont find record keeping attractive so I can't be sure but probably 15 or more beers.
What’s your favourite style to brew or drink?
I dont have a favourite style to brew or drink as I crave variety but you can't go past a good English Ale and my favourite brews to date were a German and Bohemian Pilsner.
Do you have a favourite commercial beer?
I don’t but if I had to choose one it would be Coopers Sparkling Ale.
What system do you brew with?
Braumeister 50 L - I brew with a couple of friends and we usually brew 60L batches.
What’s your favourite brewing gadget/tool?
The Bottle washer, so simple but effective.
What’s been your best highlight since you started brewing?
Probably the 2nd place for the Saison at this years Begian  Beerfest competition and my haul of medals for mead at the Eltham wine show last year.
What about your biggest disaster?
When the pully rope snapped just after the malt pipe cleared the Braumeister. 13+ kgs of hot wet grain drops very very fast. Very lucky it wasn't too high as it dropped back in but with a bloody big splash!
What’s your favourite brewery to spend some time at.
I would love to visit an old English brewery such as Marstons or Samuel Smiths.
What would be your best tip for others?
Get the basics right but don't sweat the small stuff.  Brewing is very forgiving, don't worry if you miss your mash temps or you forget to the late hop addition, It might not come out exactly how you wanted but the chances are it will taste OK and you can still drink it.
What do you love about brewing that keeps you picking up the paddle?
My thirst to learn, I just love how every aspect of brewing, be it the mash or yeast health, can turn into a rabbit hole of information. And the comraderie of brewing beer.
When you’re not brewing, how do you spend the rest of your spare time?
Reading about brewing beer or planning my next mead.

The AGM is coming around again at the June meeting, so have a think about the Club and consider getting involved to help make it what you would like to see it become.

Two guys are out drinking when one of them falls off his barstool and lies motionless on the floor.

"One thing about Fred," his buddy says to the bartender. "He knows when to stop."

Membership Subs for 2018/19 are due by July 1st 2018.
The club's preferred method of payment is online
http://3.24.98.56/register/melbourne-brewers-membership-2018-2019/
Why not be one step ahead of the Treasurer this year and get paid up early!
Anyone who pays their Subs on or before the June Club meeting will go in a draw to win a copy of Gordon Strong's Modern Homebrew Recipies https://www.bookdepository.com/Modern-Homebrew-Recipes-Gordon-Strong/9781938469145

New members: If you believe you are not on the club mailing list, send the committee an email or bring it up with someone at a meeting to make sure we add you in.

The Annual Dinner is set to be on Saturday the 11th of August at William Angliss.

30th of May, internal comp on Stouts.