Designing my “Get your kit off” recipe

As you probably already know, The clubs “get your kit off” competition is happening at the June meeting. This is a great in-house competition where the idea is to brew a beer ‘based’ on a standard beer kit but which can be modified in any way. And its not too late to brew, if you put an ale recipe down this weekend you could have something in time.

I was keen to give it a go this year but everything I have brewed has been either an extract kit (sometimes with specialty grains) or came from Brewing Classic Styles so I had no idea how to design my own recipe. This is how I went about it and my brewing process. 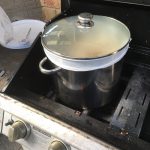 First up what style? I decided that if it’s any good I wanted to enter it in the Stout Extravaganza Competition, so I checked the entry style guidelines and settled on a Brown Porter.

I was searching for kit & kilo style recipes in all the usual places but came up short. I almost just went with a recipe on the Coopers website but in the end, I went back to Brewing Classic Styles and decided on the Brown Porter. (There’s a copy in the club library)

My thought was, as all the recipes are presented as a LME base along with specialty grains and hop additions, why not use a LME kit to replace some or all of the LME recipe base leaving me to steep the specialty grains. As the tins are already hopped I figured I could give some thought to its IBU’s and boil any bittering shortfall, flavour & aroma hops. I wasn’t exactly sure what I was doing here but its brewing, not brain surgery so “how hard could it be”?

I reckon that would have been enough but then I remembered BCS also has all grain options and instructions on how to perform a stove top partial mash and boil. I had done some in the past and as I had some Viking Pale Ale malt on hand, I figured I could go further and substitute some of the LME for grains. Thinking this has to improve the final result, right?

The recipe uses 3.08kg of Pale Ale Malt so I substituted a Coopers 1.7kg Pale Ale kit and decided to make up the 1.38kg difference with grain.

I have not calculated the expected gravity from grains before so I cheated and looked at the ‘All Grain’ equivalent of the recipe and figured I’d just work out a grain/LME ratio. 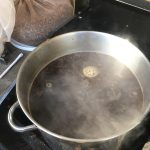 The stovetop partial mash and boil is quite straight forward, conduct the mash with a 3L/Kg water/grist ratio in a grain bag. Then dunk the bag in 7.5L of water @ 74c (in a separate pot big enough for the boil) then discard. Add the wort from the first pot and conduct your boil in the usual fashion and don’t forget to add the extract kit, I added mine at the end of the boil to pasteurise it. Cool and then top it off in the fermenter with water (I used water I had previously boiled. Pitch your yeast and you are done. My partial mash & boil were performed on the BBQ which works a treat when you don’t have a stove big enough. Its works well for keeping the mash at temp, I closed the lid and left one burner going at the opposite end.

GET YOUR KIT OFF FOR THE JUNE MEETING!

A reminder of the rules:

NO MORE RULES. Feel free to be as whacky as you wish or as boring as a mild made with a brown ale tin thinned out to 1.035OG with tin supplied yeast.