Happy New Year to all, let's make 2018 a fantastic year to be part of the Melbourne Brewers, and the best way to do that is to get involved.

The Committee are making an all out effort to fill the calendar with plenty of activities to meet the needs of the membership.

The start of the year is always a hectic one with BeerFest being run on Saturday 24th and Sunday 25th of February. It is the longest running craft brewing competition in Victoria and attracts a large number of entries.
Traditionally this event has been at a location for a weekend away, but this year we have brought BeerFest into Melbourne, hosting it from our club headquarters in Ferntree Gully to try to attract additional participation from both our own members as well as other home brew club members.
We will need participation from our own club members to make this event successful so don't be shy as a helping hand will be greatly appreciated.
To keep the competitive juices moving along there are a number of in-house competitions being organised throughout the year with the first this month at the January meeting for Wheat and Rye beers, with March being the next on the calendar for a Belgium Ale Comp.
Last November we submitted a proposal to obtain some rarely found South African Hops (African Queen, Southern Star and Southern Dawn) that Hawker Brewery were making available to some home brew clubs throughout Australia. The Melbourne Brewers were one of only two clubs in Melbourne (the other was Macedon Home Brew Club) to gain the hops. The idea was that we brew anything we like, but need to submit at least one 19 litre keg to accompany their launch of their Hop Series IPA Edition 2.
Members of the club have brewed six different beers and these beers will be tasted and judged as to which beer will represent the club.
The launch will be at Foragers Drop later in February. Date to be confirmed. It will be a Hawkers Tap Takeover and accompanied by one of our brews as a taster.

Although Hawkers Beer was founded only 3 years ago, Mazen's business has achieved many acolades including Supreme Champion Brewer award at the 2016 International Beer Challenge in London and won 12 medals at the Australian International Beer Awards.
Mazen is hoping to be able to get along to our January meeting to taste and enjoy those beers that our Melbourne Brewers have made and to mingle with our membership.

Hope to see you all at Pete's warehouse this month.

Januarys meeting this Wednesday the 31st will be at Pete's warehouse again. There will be a sausage sizzle to kick it off at the start so don't be late and then we will be judging the Wheat and Rye internal competition so remember your entries. 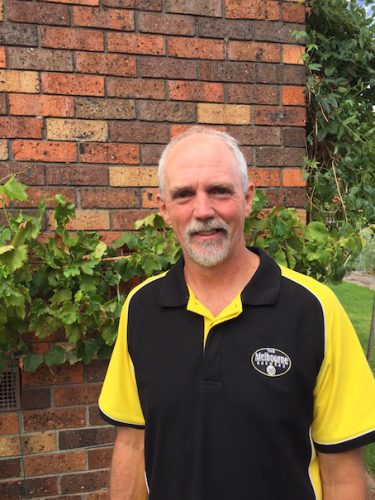 I am from Melbourne, but grew up in London (12 years) and also lived and worked in Kuala Lumpur (Malaysia) for 5 ½ years. I turned 60 last week which was a significant milestone.

I have been married to Rhonda for over 37 years and thankfully she fully supports my brewing activities (and all of my sporting commitments over the years) and gets involved in tasting, identifying aromas and even bottles with me – a great support and judge really.

We have 2 children (31 and nearly 30) and about to become Grandparents in July.

I love my sport and have played Footy, Cricket, Baseball, Table Tennis, Hockey and Basketball at various competitive levels.

I joined the Melbourne Brewers in 2014.

I like the idea of talking, drinking, discussing and improving my Brewing and the club offers all of that and more.

It offers the opportunity to talk to likeminded people who share an interest in beer and provides social opportunities to enjoy everything associated with brewing.

In 2003 I was working with a guy who homebrewed kit beers and decided to give that a go and see what I could do rather than drinking commercial crap at the time. I have always drunk Beer and collected Scotch over the years, so it seemed like a good hobby to take up.

I started on strictly Kit beers for 6 or 7 years and experimented with hops and grain a bit, without really understanding the process and impacts on ingredients.

I did  a truckload of kit beers (60 or more?) and now up to 48 Grain beers, including the last 2 I did on the Australia day weekend

Would have to be Pale Ales, but I am super keen on IPA’s.

Is that also your favourite style to drink?

What system do you use?

I am now using a Robobrew set up (with a Crown Urn for heating sparge water – used to be my BIAB set up) and added a pump to that recently.

Probably the refractometer, I can’t believe how much I use it, but think it gives me some idea that I actually know what I am doing on a brew day !

That would have to be brewing Stout, then an Oatmeal Stout for others. I do not drink them and that was reflected in the quality of those 2 brews, not a lot of Love happening and it showed. Both infected I think.

Clean, Clean and then Clean your brewing equipment and be organised on the day. Find what process works for you and stick to it where you can.

Go to beer is Leffe, followed by Schofferhoffer,

What do you love about brewing that keeps you going?

I love the variety I can brew and share with people. In addition I love a cold beer at the end of the day, but rarely drink during the week (old habit which goes out the window when we travel).

The quality of homebrew is usually very good, with great flavours and aromas, something I cannot find in most commercial beers. Craft beers are different, but the homebrew is up there.

I have just finished renovating the house inside and out (nearly 4 years). After retiring in 2008 (at 50) we travelled a lot overseas and around Australia. I love woodwork and painting (houses etc – not Art) and am always building something or helping someone else out.

I am still playing Baseball (Pan Pacs Masters and World Masters) and enjoy that a lot.

Old man Murphy had worked down at the brewery for years, but one day , he just wasn't paying attention and he tripped on the walkway and fell over into the beer vat and drowned.

The foreman thought it should be his job to inform the widow Murphy of her old man's death. He showed up at the front door and rang the bell. When she came to the door, he said, "I'm sorry to tell you, but poor old Murphy passed away at work today when he fell into the vat and drowned."

She wept and covered her face with her apron and after a time, between sobs, she asked, "Tell me, did he suffer?"

"I don't think so," said the foreman: "He got out three times to go to the men's room.

Call out for judges and stewards, we still need more volunteers! This year we will be in Melbourne at the Warehouse in Ferntree Gully so it is easy access to and from.

Remember everyone, entries close on the 10th of February!

It's now late January 2018 and a special reminder needs to be put out for everyone to get their Annual fees paid.

Enter into your calendar Steinbrew for the 17th of March.

May internal comp on Stouts.